History of Android Logo ? How Android logo was designed and who designed it ?

Hello friends most of the mobile phones in the world are occupied by Android only which directly shows the monopoly of android in the international market . But have you ever thought why and how android’s logo was designed . Don’t know ? Then Don’t worry ! SuperArticlesIndia is here to help you .

actually android means such and automation which resembles humans ,and that is why its logo .

WHY Android logo was designed ?

No sense becomes to ask and answer such questions in real , because any company is known by its LOGO and name only . Therefore android has also a logo .

The graphic designer Irina Blok who work in Google designed this internationally used Android logo . It was designed  in 2007 . Blok told that the logo was desined in such way that it is cusmizable by anyone and anyway .

What does Android consist of ?

The main  element of android is a Robot whose torso is in Quadrangular shape ,head is semicircular containing tow antennas and limbs are in the form of Two rods in the sides .

Why a Robot in the Android Symbol ?

Because the BOSS of IRINA BLOK asked her to necessarily include a robot ,so she had to do so .

WHY the Color is GREEN ?

According to Irina , Android logo like THE Android Operating System is an Open Source Symbol meaning anyone can use it publicly in the way they wish . IT means anyone can use this symbol according to their own wish.

At that time there had been a Video game whose characters name was android ,and something from this the android logo is inspired  . You can see the below image . The one in the left is  the Game character and at the right is the Android logo. 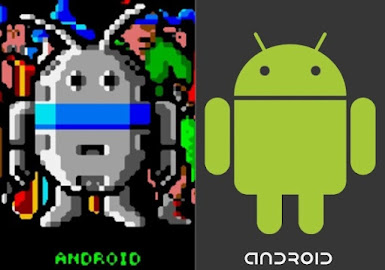 THANKS FOR BEING HERE !
SUPERARTICLESINDIA

Read our Other Useful Articles :