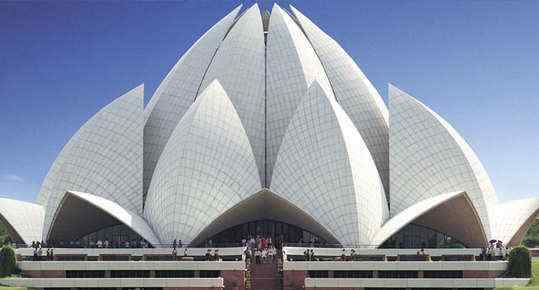 Friends if you would have gone to DELHI and after a visit of India Gate ,Red Fort , and Akshardham , you don’t go on a visit to Lotus Temple ,this seems quite difficult ,saying honestly impossible . Because it is one of the most important and most frequently visited places of Delhi and of India too by National as well as international visitors and tourists .

You already have known that it is based in New Delhi , to be more precise in Nehru Place near Kalka Ji Metro Station . The temple was built by Bahai Community .

Why Lotus Temple is so Famous ?

Though the building is termed a Temple by name but it is the one where no God resides meaning that it is completely a non-religious place to visit for everyone regardless of religion ,community etc .(all these are bad parameters ). This is the place where no one worships any God nor does any religious acts . But that’s not the only reason to visit this awesome place . Its architecture is also awesome .

As the name suggests ,it’s shaped in the form of a Lotus Flower and the so the name . But let me also tell you that it’s another name is Bahai Upasana Temple ,inthe name of Bahai Community . The temple if the shape of a half blown Lotus .

When was Lotus Constructed (Designed )?

The lotus temple was designed and completely constructed in November 1986 and opened publicly in December the same year . The temple is so attractive that it is termed as the Taj Mahal of 20th Century ,and why not to say ,because you may compare the two. The architecture of the temple was deigned by Iranian Architect Fariborj Sahba and the Working Structural Engineers were Flint and Neil .

According to reports and estimates the cost of construction of the temple was around 10 Million Dollars ,which inn Indian Rupee (INR )equals 74 Crores and 12 Lakhs of that time ( around 1986).

How to reach the LOTUS TEMPLE ?

To reach the Lotus Temple ,there are all modes of transport available like Bus,Train,Airport and personal convenience . After reaching to Delhi ,you may take the benefit of Delhi Metro of the buses of DTC (Delhi Transport Corporation).

Q. What is the another name of Lotus Temple ?- Bahai Upasana Temple

Q.What is the cost of construction ? -10 Million Dollar