In this article I have given certain snapshots and quick reviews about him …..

He was noted for his powerful, wide-ranging voice and theatrical live shows. His Bat Out of Hell trilogy—   Bat Out of Hell,  Bat Out of Hell II: Back into Hell, and Bat Out of Hell III: The Monster Is Loose—     has sold more than 65 million albums worldwide. More than four decades after its release, the first album still sells an estimated 200,000 copies annually and stayed on the charts for over nine years, making it one of the best-selling albums in history.

More about him in short :

Aday has appeared in almost 50 films and TV shows sometimes as he is or sometimes as a Character in the show.

In Los Angeles, Aday formed his first band, Meat Loaf Soul, after a nickname coined by his football coach because of his weight. He was immediately offered three recording contracts, all of which he turned down. Meat Loaf Soul’s first gig was in Huntington Beach in 1968 at the Cave, opening for Van Morrison‘s band Them and Question Mark and the Mysterians.

While performing their cover of the Howling‘ Wolf song “Smokestack Lightning“, the smoke machine they used made too much smoke and the club had to be cleared out. Later, the band was the opening act at Cal State Northridge for Renaissance, Taj Mahal, and Janis Joplin. The band then underwent several changes of lead guitarists, changing the name of the band each time.

The new names included Popcorn Blizzard and Floating Circus. As Floating Circus, they opened for the Who, the Fugs, the Stooges, MC5, Grateful Dead, and the Grease Band. Their regional success led them to release a single, “Once Upon a Time”, backed with “Hello”. Then Meat Loaf joined the Los Angeles production of the musical Hair. Meat Loaf later stated that the biggest life struggle he had to overcome was not being taken seriously in the music industry. He compared his treatment to that of a “circus clown“. 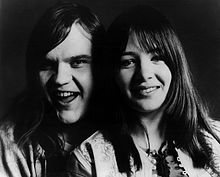 With the publicity generated from Hair, Meat Loaf was invited to record with Motown. They suggested he do a duet with Shaun “Stoney” Murphy, who had performed with him in Hair, to which he agreed. The Motown production team in charge of the album wrote and selected the songs while Meat Loaf and Stoney came in only to lay down their vocals.

The album, titled Stoney & Meatloaf (with Meat Loaf misspelled as one word) was completed in the summer of 1971 and released in September of that year. A single released in advance of the album, “What You See Is What You Get”, reached number thirty-six on the Best Selling Soul Singles chart (the same chart is now titled Hot R&B/Hip-Hop Songs) and seventy-one on the Billboard Hot 100 chart.

To support their album, Meat Loaf and Stoney toured with Jake Wade and the Soul Searchers, opening for Richie Havens, the Who, the Stooges, Bob Seger, Alice Cooper, and Rare Earth. Meat Loaf left soon after Motown replaced his and Stoney’s vocals from the one song he liked, “Who Is the Leader of the People?” with new vocals by Edwin Starr. The album was re-released following Meat Loaf’s later success, with Stoney’s vocals removed. Meat Loaf’s version of “Who Is the Leader of the People?” was released; however, the album did not sell well.

In December 1972, Meat Loaf was in the original off-Broadway production of Rainbow at the Orpheum Theatre in New York.

More Than You Deserve

After the tour, Meat Loaf rejoined the cast of Hair, this time on Broadway. After he hired an agent, he auditioned for the Public Theater‘s production of More Than You Deserve. During the audition Meat Loaf met his future collaborator Jim Steinman. He sang a Stoney and Meatloaf favorite of his, “(I’d Love to Be) As Heavy as Jesus”, and subsequently got the part of Rabbit, a maniac that blows up his fellow soldiers so they can “go home.” Ron Silver and Fred Gwynne were also in the show. In the summer between the show’s workshop production (April 1973) and full production (Nov 1973 – Jan 1974), he appeared in a Shakespeare in the Park production of As You Like It with Raul Julia and Mary Beth Hurt.

He recorded a single of “More Than You Deserve“, with a cover of “Presence of the Lord” as the B-side. He was only able to save three copies of it because the record company did not allow its release. He recorded it again (1981) in a slightly rougher voice. The original single came out on RSO SO-407 with some promotional copies bearing both songs, while some were double-A side copies with “More Than You Deserve” in mono and stereo on them.

In late 1973, Meat Loaf was cast in the original L.A. Roxy cast of The Rocky Horror Show, playing the parts of Eddie and Dr. Everett Scott.  Two other cast members from More Than You Deserve were also part of this cast; Graham Jarvis (playing The Narrator) and Kim Milford (playing Rocky).  The success of the musical led to the filming of The Rocky Horror Picture Show in which Meat Loaf played only Eddie, a decision he said made the movie not as good as the musical.  About the same time, Meat Loaf and Steinmann sarted work on Bat Out of Hell. Meat Loaf convinced Epic Records to shoot videos for four songs, “Bat Out of Hell“, “Paradise by the Dashboard Light“,   ”  You Took the Words Right Out of My Mouth“, and “Two Out of Three Ain’t Bad“.

He then convinced Lou Adler, the producer of Rocky Horror, to run the “Paradise” video as a trailer to the movie. Meat Loaf’s final theatrical show in New York City was Gower Champion’s Rockabye Hamlet, a Hamlet musical. It closed two weeks into its initial run. Meat Loaf later returned occasionally to perform “Hot Patootie – Bless My Soul” for a special Rocky Horror reunion or convention, and rarely at his own live shows (one performance of which was released in the 1996 Live Around the World CD set).

During his recording of the soundtrack for Rocky Horror, Meat Loaf recorded two more songs: “Stand by Me” (a Ben E. King cover), and “Clap Your Hands”. They remained unreleased until 1984, when they appeared as B-sides to the “Nowhere Fast” single.

In 1976, Meat Loaf recorded lead vocals for Ted Nugent‘s album Free-for-All when regular Nugent lead vocalist Derek St. Holmes temporarily quit the band. Meat Loaf sang lead on five of the album’s nine tracks. As on the “Stoney & Meatloaf” album, he was credited as Meatloaf (one word) on the “Free-for-All” liner notes. 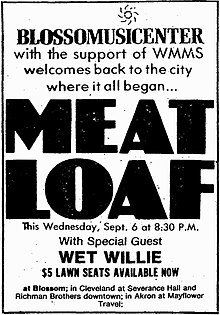