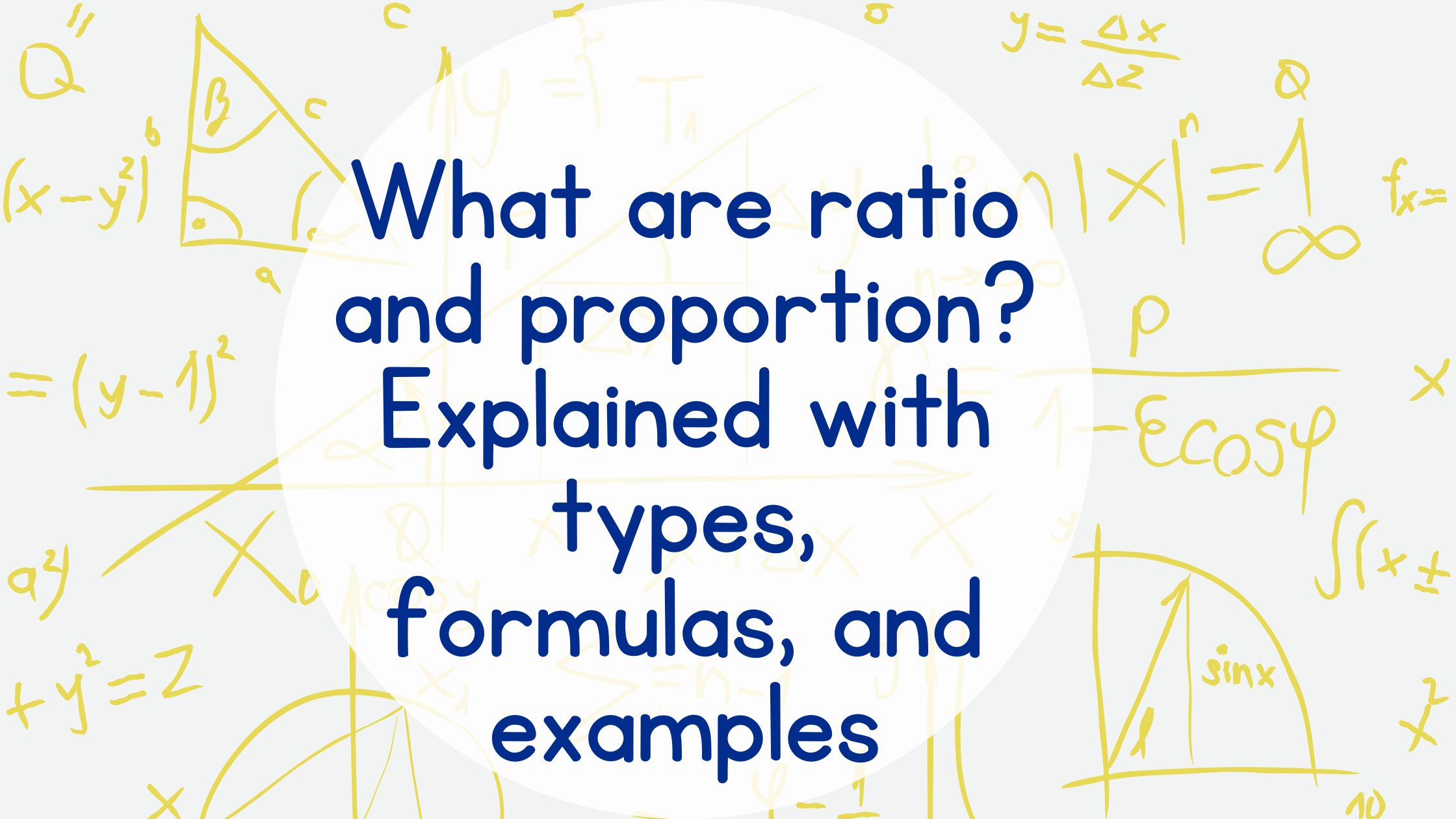 Have you ever wondered what the difference is between ratio and proportion? If so, you’re not alone. Many people are confused about the two terms and often use them interchangeably. In this blog post, we’re going to clear up any confusion you may have about ratio and proportion.

Ratios are a key concept in mathematics and statistics. They play an important role in understanding how two numbers relate to each other. Ratios can be represented as fractions, decimals, or percentages.

Ratios are important for understanding all sorts of mathematical concepts, including proportions, decimals, averages, percentages, etc. Understanding ratios is essential for doing well in math classes.

The general expression of the ratio is:

There are four types of ratios.

Whole-to-part and part-to-whole ratios can also be converted to other types of proportions using multiplication or division. For example, if 1 cup of sugar is added to 3 cups of sugar, the resulting mixture would have a 5 part-to-whole proportion.

How to calculate the ratio?

Below is an example of calculating the ratio.

In a bookstore, there are 30 products. From these 30 products, 16 are books, 8 are pencils, and 6 are notebooks. Calculate the ratios of the given products.

Step 1: First of all, take the given information and write it.

Step 2: Now calculate the given ratios one by one.

The term will be referring as a part to whole ratios

The ratio will be written as:

Proportion is a term that has different meanings in different branches of mathematics. In statistics, it refers to the degree to which two things share qualities or features.

For example, if you have 100 pieces of candy and 50 pieces of chocolate, then the proportion of each type of candy is 50/100 or half.

Proportions can be used to describe the relationships between numbers, percentages, and amounts. For example, if you want to know how many cups are in a container filled with 200 ounces of water, you could use a proportion (200 ounces ÷ 4 cups = 40 cups) to find the answer.

Construction projects also commonly use proportions such as square footage divided by a number of rooms. Knowing and using these proportions can help make tasks more efficient and accurate.

The general expression of proportion is:

There are two types of proportions.

Inverse proportions are a bit more complicated than direct proportions, but still relatively easy to solve. Their equations generally involve taking one quantity and dividing it by the other, resulting in a ratio that is always negative.

How to solve proportions?

In mathematics, solving proportions is not a difficult task, you need to understand the statement of the given problem to proceed further. Follow the below example to understand how to solve proportions.

Step 1: First of all, write the given data values of employees and machines.

employees are required to run 10 machines = 30

Step 3: Now write the ratios of employees and machines according to the above formula.

Step 4: Now to calculate the value of x multiply the means and extreme values.

Hence, 45 employees are required to run 15 machines in a cloth-making factory

In conclusion, ratios and proportions are mathematical concepts that play an important role in many areas of life. Whether you’re baking a cake or trying to figure out how much paint to buy for your living room, knowing how to calculate ratios and proportions can be very helpful. Use the formulas and examples in this blog post to brush up on your ratio and proportion skills, and make sure to keep a proportion calculator handy when you need it.

1 thought on “What are ratio and proportion? Explained with types, formulas, and examples . SAI India”